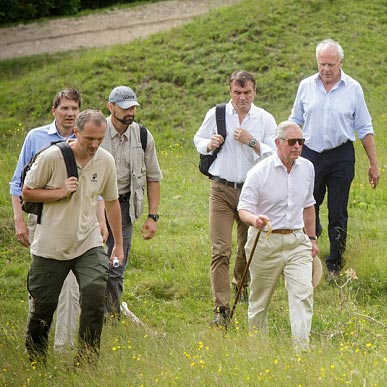 One should start with a simple "Thank you, Your Majesty!" but after almost 20 years since his first visit to Romania, we have to say more than a simple "thank you".

One should start with a simple "Thank you, your Majesty!" but after almost 20 years since his Majesty's first visit to Romania, we have to say more than a simple "thank you".

I think we really should start the article with the name of Mrs. Jessica Douglas-Home from UK, the founder of Mihai Eminescu Trust, who is actually one of those few persons who offered the incentives to Prince Charles start falling in love with Transylvania.

Mrs. Jessica Douglas-Home has written for The Guardian, The Telegraph, The Times, The Spectator and The Wall Street Journal and she been in Romania starting with 1987 when she was connected to Romanian philosophers and historians, helping them to keep their subject alive.

The Mihai Eminescu Trust was set up initially to help individual philosophers and historians, but changed its role to helping universities. Then, by chance, Mrs Jessica Douglas-Home came across the Saxon Villages, where she felt in love with one particular village, Viscri, with a beautiful church since 14th Century and its altar piece which had been totally abandoned. Another person to mention is Mrs. Caroline Fernolend - the current Executive Director of Mihai Eminescu Trust - who helped Mrs. Jessica Douglas-Home to learn about the mass of other fortified churches and villages in Transylvania. All the information about the Saxons, Romanians and Hungarians who lived in the area was absolutely fascinating. This led Mrs. Jessica Douglas-Home to have William Blacker and her to publish a book written by William Blacker - The Plight of the Saxons of Transylvania - telling the West about this extraordinary enclave in Romania.

"The Plight of the Saxons of Transylvania" came to the notice of Prince Charles. When he saw this booklet he became equally fascinated.

Soon after that, Prince Charles became the patron of Mihai Eminescu Trust.

What Romania has achieved since Prince Charles first visit in 1998 to Romania is priceless. The most important thing though is that it happened to be when Romania needed it most, speaking especially about the traditions or even the small number of genuine Saxons living in Transylvania which were disappearing one by one.
Romania is surely much more than just Transylvania, but with the inheritance of the Dracula myth related to this piece of land and a castle in the town of Bran probably, made his Majesty curious about coming here for the fist time.
Some of his words of appreciation about this beautiful land:
"I hadn't been aware just how extraordinary this part of the world is with all its biodiversity, the wildflower meadows.
"It just seemed to me, particularly this area of the Carpathian mountains, to be literally the last unspoilt, untouched area."
Prince Charles has been the patron of Mihai Eminescu Trust by 2015 when he launched on 2nd June 2015 The Prince of Wales Foundation Romania, his own charity that supports the Romania nation’s heritage and rural life.
http://printuldewales.org/
After exactly one year, Prince Charles Foundation has opened in the Saxon Village of VISCRI, Romania a training center to encourage conservation, farming, and sustainable development in Romania.
For more information about the Training Center in Viscri, click here
Happy 1st Anniversary and Good Luck with all the very interesting up coming projects!
Romania is surely lucky to have people like Prince Charles, Mrs. Jessica Douglas-Home and Mrs. Caroline Fernolend here!
Photo source: www.flickr.com